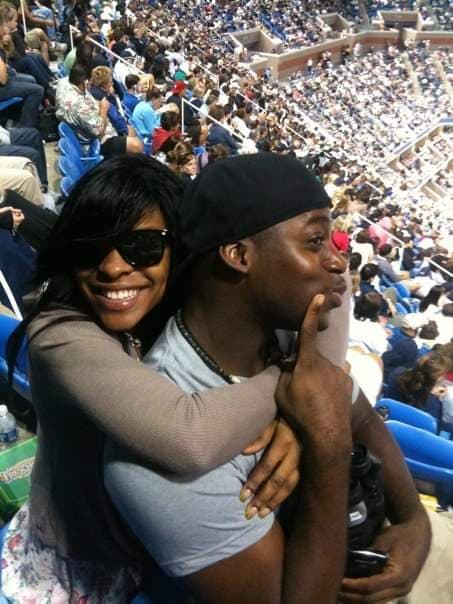 One of the most pivotal moments of my life was deciding to play tennis at Dillard High School at the start of my junior year. During my freshman and sophomore year at Dillard, I would watch our tennis team practice as I marched by the army green caged courts wishing I could be volleying a forehand cross court for a match point in an actual match. However, at that time I was on the color guard and drill team competition team that took place during the tennis practices.

I would always listen for the match scores during the morning announcements imagining that the announcer read.. Rishone Todd won his match 6-3 6-0 against Blanch Ely High School number 2 prospect. So I made a goal at the end of my sophomore year that I would join the tennis team no matter what.

I had been conditioned, through the sport itself, to think that only certain things were for certain people or exclusive to certain races. Though I loved tennis, I honestly thought that tennis was out of my wheelhouse because of my complexion. Oh how extremely wrong I was. I was led to think this way because no one looked like me that was watching from the stands or playing in the matches.

My favorite player will always be Andre Agassi. Andre Agassi is an exciting, professional tennis player that set the early 90s on fire and is one of the greatest tennis players of all time in my opinion. He had some epic battles with Pete Sampras, another incredible American tennis superstar. However, they both did not look like me and it played into the marketing that tennis was not meant for people of color.

However, this blog is not about Andre Agassi or Pete Sampras, it’s about two incredible women that proved to me that I was capable of anything no matter how the world painted me. Venus and Serena Williams made their entrance in the pro circuit in the mid to late 90s. They changed the image of tennis permanently.
They brought so much grace, athleticism, strategy, and strength to the sport. I was already a die hard fan of tennis but finally seeing two women of color play on television lit a fire inside me that I can’t even explain through words. I no longer was expected to play basketball, football, run track, or soccer. I could focus on my academics, continue to enjoy being a member of AFJROTC program and now choose to fulfill a childhood dream to play Tennis for my high school.

This past week Serena played her last match at the US Open before considering her retirement and it certainly made me emotional. It was a happy, fulfilled, and proud emotional moment for me. As I was cheering her on to win her match, I realized I had been cheering for 25 years through all of her 23 grand slams titles. Now that I am a grown man I realized I was cheering for my dream to be different from the norm.  Even though she lost after playing a great match I simultaneously I saw the 15 year old in Lauderhill, Florida sitting on the couch excited to pick up a tennis racket and a few fresh tennis balls because Serena just beat Martina Hingis (the number 1 women’s tennis player in the world) at the US Open for her first single grand slam title. She is now arguably the greatest athlete of all time and has opened the door for so many other women in sports and tennis players around the world. Even her opponent who beat her shared how much Serena and Venus inspired her career. It was touching to hear how a woman, not of color, honoring Serena for inspiring her journey to where she is right now.

Over the years there have been so many players that have made me proud of my complexion. Players like James Blake, Gaël Monfils, Jo Wilfreid Tsonga, Naomi Osaka, Sloane Stephens, Donald Young, Madison Keys, Coco gauff and Today (September 5th, 2022) I witnessed Francis Tiafoe beat Rafael Nadal in 4 set thriller to make it to the US Open Semifinals. He played brilliantly.

Why do I share this story? I know I am a black man and vice versa you may think dance is not for you because you actually believe that knowing how to dance has to do with your complexion. I am here to tell you that it is a myth. Everything can be learned and mastered with time if you are invested for the right reasons. Just like I thought tennis wasn’t for me; I learned that I needed Venus and Serena to help me believe in myself. Our studio is a reflection of that belief.

We often believe that we can’t do something because we have a different complexion, because we are too short, or too tall, or are not the right size or are not flexible enough, or you have no rhythm or think you have 2 left feet(which is also a lie)… etc. Sometimes it’s the marketing and history that prevents you from doing that one thing that brings you life. Well I am here to ask you. Why can’t you? In an effort to tell you to go out there and start doing. It may take some time to learn or you may even experience some discomfort but be open to that process because it is liberating. And in the process of doing the thing that you love you automatically give other room to go after things they may not have thought they were capable of.

I will end this blog like this. As I sat in my C++ programming irate period class, I remember hearing my name at the morning announcements. The student said my 1st name incorrectly but I didn’t care. She said Rishown Todd won his match 6-4 6-1 against Platantion #2. I closed my eyes in a meditative celebration because I did.