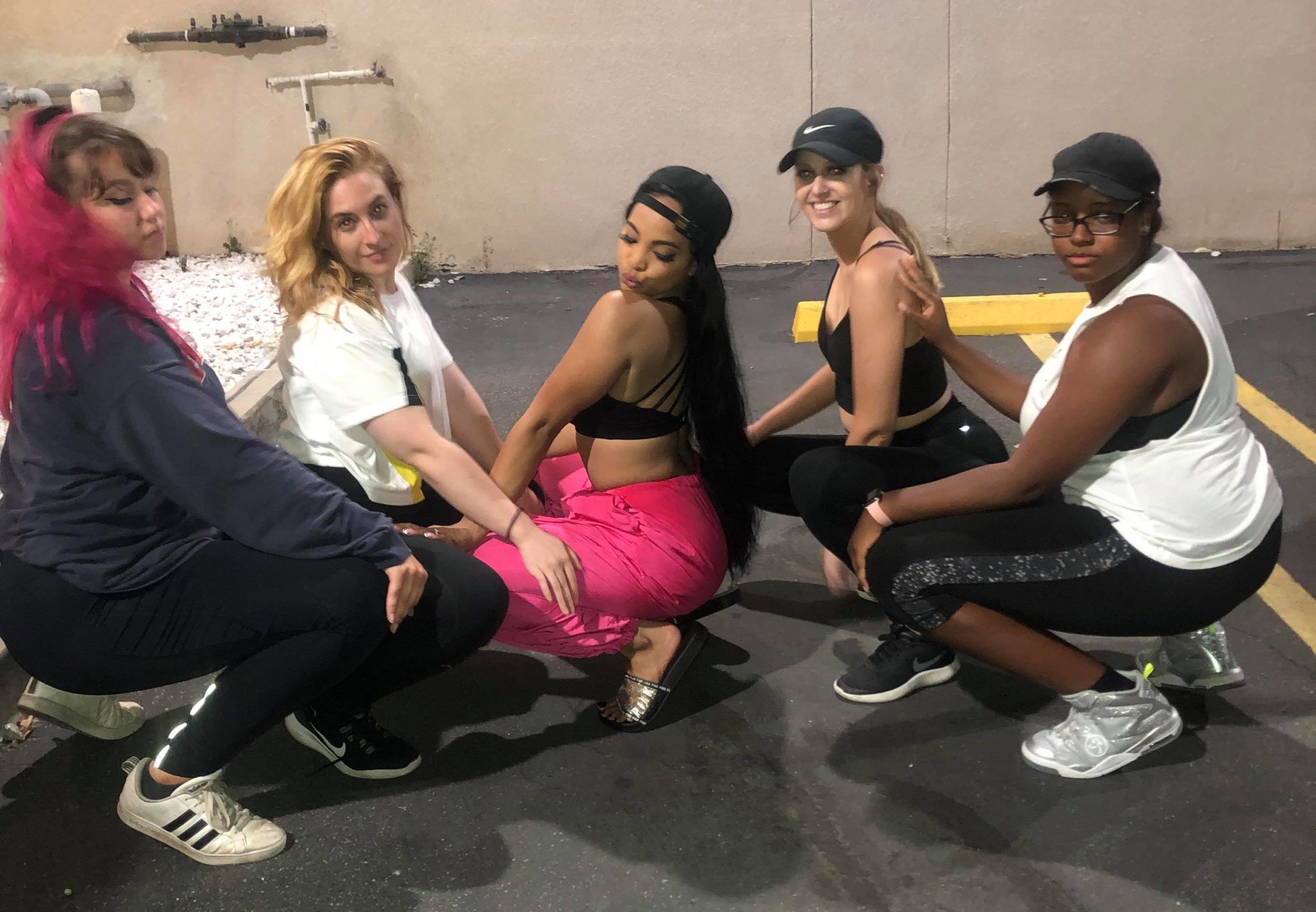 We we’re driving from the LAX airport to our AirBnB, and Kellie, Starr, and Jamie had just grabbed their spot for the pop up class with Aliya Janell that they just saw come across their Instagram feed. “Susie, are you gunna do it?” they asked. I had a long pause. I had no intention of taking a class with Aliya Janell. Don’t get me wrong, I have absolutely nothing against her; I’m actually mesmerized by her choreo. But the thought of taking her class scared the crap out of me.

If you’re not familiar with Aliya Janell, she’s known for more of a swaggy, “racket heels” style of choreography, which most of her routines involve twerking to songs I would never normally listen to. Needless to say, the thought of taking a class with her made me very uncomfortable because of the explicit nature of the music as well as some of the movement.

But the ladies gave me a “Come on, you’ve got this!” And because I knew I went to LA with the intention of putting myself in environments that would challenge me and inspire growth, I signed up for the class before I could talk myself out of it.

Two days later: It’s class day. At that point I was feeling mostly excitement, because I simply love dance and learning choreography. The one thing I was nervous about was the possibility of having to do splits, cause I’ve seen Aliya Janell incorporate splits and sometimes twerking while in the split into most of her routines. I currently do not have that flexibility, so I was a little concerned that it would impact my overall experience and enjoyment of the class.

We get to the studio with our excited and anxious energy, and we talked to a few other dancers who shared the same feelings. But as soon as Aliya Janell started talking, I knew this was going to be one of the best dance class experiences I’d ever had. She knew exactly how to speak to the entire room, while at the same time, making it feel like she was speaking directly to your soul. I was inspired and encouraged to let go, try something new, and embrace whatever the heck was about to happen over the next two hours.

I learned the choreo, and I was right insofar as it definitely being out of my usual comfort zone. And to be honest, I looked a bit of a hot mess, especially during the twerking parts. But I did it, and that’s literally all that mattered to me.

I share all of this with you, cause I know that we’ve all been there, whether with dance or another potential passion. We see something that excites us and lights us up on the inside, but we shut down the possibility of even trying it because we’re scared; Scared we’re gunna suck, look dumb, fall down, and over all “fail.”

But I’m here to tell you to follow your fears, which was a concept I first heard of from the incredibly intelligent Marie Forleo. Of course, I’m not talking about the fears that keep you alive, such as a fear of jumping off a cliff with no protective gear. Those fears are important; hold onto those with dear life.

I’m talking about those times where you see someone killing it in karaoke, and you can’t help but light up and become emotionally invested when you watch. You can feel that small voice within you, telling you to go up and sing your heart out. But here comes along that pesky fear yelling at you that “you suck” or that “no one is going to want to listen to you.”

It’s ok to recognize that you’re afraid. I want you to follow that fear. Cause I can almost guarantee you that whatever your’re afraid of has no real impact in the grand scheme of it. It’s one of those things where you look back ten year’s later and think to yourself, “Man, I really wish I would have just gotten on that karaoke stage… what’s the worst that could have happened?” All that does is leave you with a bunch of ‘what if’s…”

That doesn’t need to be your story. You do not need to look back and think “What if I would have just taken a chance and tried that paint class? I wonder where I’d be.” Or “Ugh, I wish I would have started going to the gym when I was younger.” If you have something that you’re excited about trying but afraid to even dip your toes in, I encourage you to GO FOR IT! What is the worse that can happen?